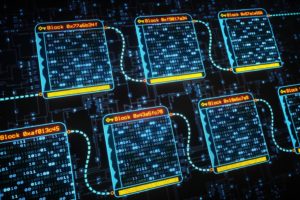 During the past few years, you’ve probably noticed all of the buzz surrounding Bitcoin and other forms of cryptocurrency. Digital cash has taken off and attracted the attention of large organizations, including the leading cloud computing company Salesforce, which recently announced that it’s working on a blockchain product, according to TechCrunch.

If you’re not already well-versed in how these digital currencies work, however, you probably have some questions about what blockchain is and why organizations like Salesforce are getting involved. Here’s a quick FAQ that should help you understand the essential facts.

1. What is blockchain? When people exchange currency (digital or otherwise), they need to keep track of transactions by using some kind of database. For cryptocurrencies, a network of peers keeps a decentralized historical record of transactions called the “blockchain,” according to Blockgeeks Inc.

It’s called a blockchain because groups of recent changes/transactions regularly get bundled into a single “block” and added to the “chain,” according to an article for The Guardian by technology reporter Alex Hern. This list of transaction blocks serves as a comprehensive record of who owns what within the realm of that cryptocurrency.

2. Why is Salesforce interested in developing a blockchain product? Salesforce has a reputation as a company that looks to adopt cutting edge technologies, TechCrunch reports. In line with that, it makes sense that the organization is interested in blockchain.

In an interview with Business Insider in March, Salesforce co-founder and CEO Marc Benioff mentioned that he started thinking about the company’s blockchain strategy while attending the World Economic Forum at a hotel in Switzerland where there also happened to be a crypto conference.

Although it’s known as the digital ledger for cryptocurrencies, blockchain can also be used as a more general business tool to track anything valuable, TechCrunch reports.

3. When will they launch this product? Benioff has said they hope to introduce a blockchain and cryptocurrency product by Dreamforce, Salesforce’s annual customer conference, according to TechCrunch. This year’s Dreamforce will take place from September 25-28 in San Francisco.

If you’d like to learn more about Salesforce, our team of tech experts can help. We work with a wide range of cloud computing solution providers and can offer an objective assessment of a wide range of cloud-based services and solutions. Feel free to contact us by calling 877-599-399 or emailing sales@stratospherenetworks.com.