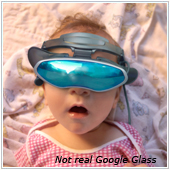 Google is a company well known for their innovative online products. Their first foray into the physical world with Android has been met with wild success. Google has now introduced the next evolution in physical products that combine all of Google’s services into one system that you can take and interact with anywhere.

On April 4, 2012 Google revealed a project called Google Glass, their take on augmented reality glasses, through a video on YouTube. This announcement was made by a team that’s part of the Google[x] lab. Google[x] is an almost covert division, focused on developing technology for the future.

It looks like the glasses will take the main functions of your smartphone – Call, Social Media, Pictures, Day-Planner and GPS – and display them on a glass lens that covers your right eye. Think of a pair of glasses missing the left lens, and you’ll get the picture. This seems like something right out of sci-fi movies from the 80s, but numerous sources, including some from Google, have stated that the first version will be released sometime in the next couple of years.

Undoubtedly the glasses will run on a new version of Android, and from the video one can determine that they will use a hybrid of voice and vision to operate. Most of the functionality of your smartphone will be on the lens. Want to know what the weather will be like for the rest of the day? Look up and the lens will present with the temperature and forecast. The video also showed the wearer come across some graffiti he thought was cool, and with his voice he instructed the taking of a picture to be shared with his circles on Google+.

What does this mean for businesses? As the glasses are still in development it’s hard to say conclusively, but businesses who already have a Google + or Google Places profile will benefit as it appears both services are heavily integrated with the platform. The possibilities on how companies could use this technology are endless. We’ve all seen movies with characters using a similar technology and now Google is bringing it one step closer to reality.

If you’re as interested in Google Glass as we are, or have questions regarding Google’s other products please don’t hesitate to contact us. We’ll be more than happy to talk with you.