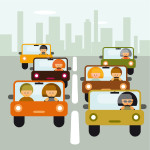 Land Rover had already announced its version at CES in Las Vegas this year, but showed off its new technology during the auto show. The company also announced its partnership with Bosch SofTech, the tech company which developed the mySPIN interface and InControl systems. InControl is compatible with iPhones and Androids, and displays the phone’s apps on the vehicle’s infotainment system.

Apps that can be used are limited, but so far InControl offers door-to-door navigation, playlists and phone and calendar access. InControl users also have access to their contact information which can be used to make phone calls.

This smartphone interface will be available in all Jaguar Ranger Rovers in 2015.

Cars that have Apple’s new CarPlay system have access to some iPhone functions through the In-vehicle Infotainment (IVI) system. The system also offers Siri-controlled voice commands to access iPhone functions such as Apple Maps, phone, music and messages. The catch? CarPlay is only compatible with Apple products.

Volvo displayed its CarPlay enabled car model that will be used in 2016 vehicle models. The driver plugs in the iPhone underneath the CarPlay dashboard, where all of the phone’s apps are displayed.

Additionally, Volvo has partnered with AT&T to power in-car Wi-Fi which can be found in models coming out this summer. The car company will also provide Volvo drivers in the U.S. and Canada with Volvo On Call, a service that allows remote access to car functions and an emergency crash notification service.

Which IVI system would you prefer— InControl or CarPlay?