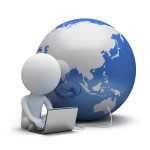 Harvard scientists sent the first transatlantic scent from New York to Paris on Tuesday, June 17, through an iPhone app called oSnap. The scent, which was reportedly champagne and passion fruit macaroon, is one of the 3,000 different scents included in the app.

How it works: The app has an Instagram-like camera for the user to snap a picture with and tag it with aroma notes already included in the app. The user is able to customized different scents by combining the aroma choices. The pictures and scents are sent as an “oNote” to the recipient who can then experience the smells via a pipe-like smelling station called an oPhone Duo which is controlled by oSnap.

Reportedly, the oPhone hardware will start at $199, however you don’t need it to send or receive a smell. If you receive an oNote without having the hardware, the app will give you a detailed description of the scent the sender is trying to portray.

David Edwards, a Harvard professor and co-founder of oNote, is currently trying to raise funds in order to produce the oPhone for home use. So far, the campaign has raised just under $8,000, a small percentage of their $150,000 goal.